I'm slowly but surely making progress on my Happy Campers double hourglass quilt. I realized a little too late that It was inching toward full size instead of twin size, but that's ok. I have done a full size quilt before. I ain't skeered. This quilt was supposed to be 173 double hourglass blocks, but my aching wrist got in the way. 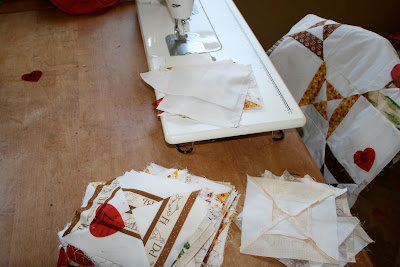 Rotary cutting tip for triangles...if you have to turn SOMETHING awkwardly to make a cut, make sure it's the rotary mat and not your hand. OUCH. I decided to do them checkboard style to cut down on the number of pieced blocks I needed without resorting to borders. I don't like figuring out how a border is going to fall on the bed and I think it can end up looking awkward if it hits the wrong spot.   I realized a little too late that the quilt was kind of brown/yellow heavy. I wanted a healthy dose of red, too. Hopefully it will pan out. 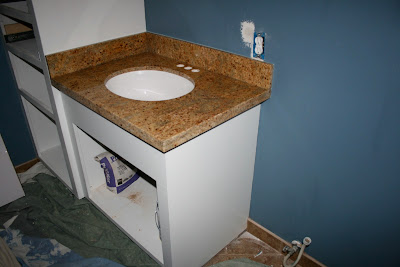 The boys bathroom has been in mid remodel for a couple of weeks now.  I wish I had a before pic, but as soon as these guys came in they started ripping and tearing and I felt a little dumb saying "hey, can you stop working and lemme take a before pic for my quilt blog???"  We are getting new tile, new toilet, & a new vanity area.  I took the leftover piece of granite and set it on my kitchen counter.  The idea is that my husband will say "oh my gosh...this granite really jazzes up this kitchen- let's go for it."  In real life, I don't think he'd ever use the word "jazzes" much less that whole sentence.  A girl can dream.

We took out the little make up station and had them build a linen cabinet.  I'm pretty sure it's going to be more functional than this way.  If not, I have a lot bigger issues than a poorly designed bathroom.  I told the guy I had people coming this weekend AND next weekend...people who like to bathe, brush their teeth, AND go potty.  We have to wrap this project up or I will be forced to let my guests use my hideous master bathroom...not good.

And bringing this point back to sewing (see, I did have a point): I wanted to make an oversized shower curtain to hide the unremodeled (but still functional and neutral) shower area.  I am still using a real shower curtain but I wanted to add another shower rod higher up with a pretty curtain.  I found this fabric at the LQS for $2/yard and it had a very Sandy Klop vibe plus it works with the American Jane-ish shade of blue I picked out even if the pictures don't seem to indicate that.  I finally put the "automatic buttonholes" from my Pfaff Creative 1471 on the top and it just was not pretty.  Hopefully it won't be too noticeable.  I really am not a fan of blue, but my 6 year old has always claimed it as his favorite color so I compromised by picking a blue I did like for this bathroom.  Of course after the paint was purchased he decided (for the first time in almost 7 years) that he likes red better.   I've had a red room before.  My trim work was so bad it looked like Dexter's killing room in there, so we are going to be happy with our American Jane inspired blue room.